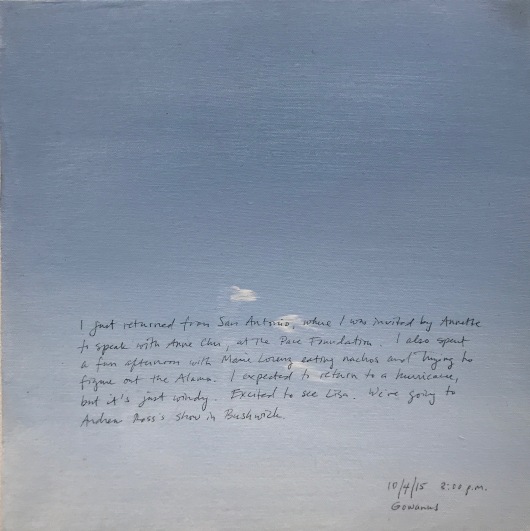 Byron Kim is a romantic and poetic social commentator. He makes generally small scale, minimalist, monochromatic- i.e. one color, serial works that are engaging, personal and evocative. Hard to believe that these small panels can be so captivating and thought provoking. .

A contemporary Korean- American artist, born in 1961, Byron Kim received a BA from Yale University in 1983 and attended Skowhegan School of Painting and Sculpture in 1986.  He has stated that the most exciting part of his work as an artist is coming up with a good idea,  the second finishing something that has come out well. He claims no allegiance to any one technique or material but is primarily a painter with a strong sense of color.

Until his most recent show at James Cohan Gallery in New York entitled Sunday Paintings, the work by Byron Kim that I knew best was Synecdoche (1991- present) at the Whitney Museum of Modern Art and the National Museum. Synecdoche, the work by Byron Kim, is a grid of oil paint mixed with wax, monochrome, 10x 18 inch panels.  Each panel is a record of the skin color of a sitter. The colors are shades of beige, peach or brown, and each panel is titled the name of the sitter.  As the grid is presented, the names of the sitters are listed alphabetically by first name. Synecdoche, the word, means a figure of speech in which a part stands in for a whole. For Byron Kim this is a work of portraiture. For the viewer, it is a social commentary on race and individuality.  Some are tempted to try to match their skin tone to one of the panels.  Though at first glance the work is completely abstract, in reality it is representational and fiercely evocative.

Synecdoche was first shown at the Whitney Biennial in 1993. It is a work in process and currently there are 400 panels. He has said that he remembers every single person whose skin color he has copied.

For the series of this work at the National Gallery he added the “portraits” of the employees increasing the sense of inclusiveness, race, community and cultural biases or class. Color here acts a signifier and metaphor for the individual. 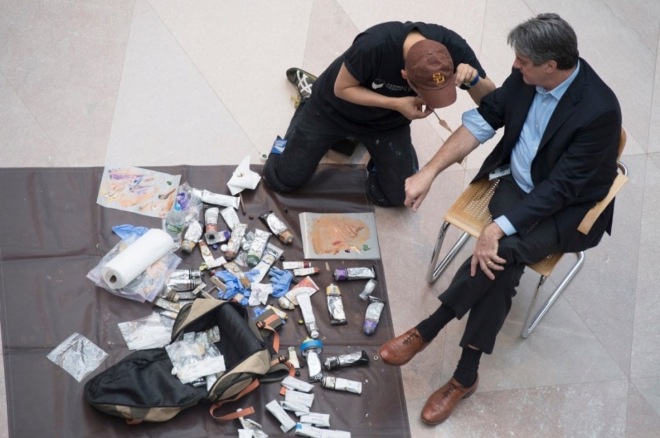 The Sunday Paintings which were recently on view at James Cohan Gallery in New York are each slightly larger in scale, 14″x14″, and are not monochromatic but rather show the sky on the Sunday it was painted. The series was begun on January 7, 2001, when he made a painting of the sky and below wrote: “Clear, snow melting dripped into the painting.  Every Sunday?”.  The Sunday paintings have continued virtually every Sunday since then, the notations at first at the bottom then in the middle of the canvas. A diary of occurrences or thoughts for the day.  The skies are realistic and varied. The blue, grey, clear or cloud-filled skies he sees over Brooklyn or California.

The paragraphs are autobiographical and often uneventful and mundane,  activities with the kids,  dinner parties, difficulty with work, marital comments,  moods, and from time to time an update on politics. The same short jottings one would expect in a quick diary note. “Today we have a black president” (“1/20/09”); Hurricanes Irene roils New York City (“8/28/11”); “Donald Trump is the president elect of the United States” (“11/14/16”). 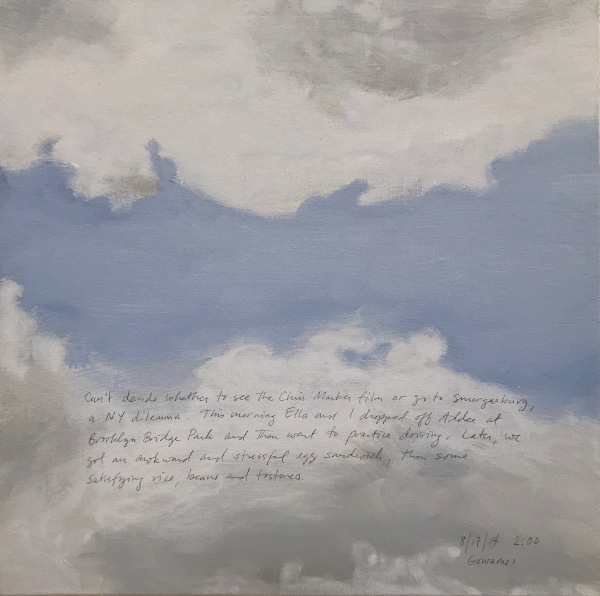 It is a very moving project, making me at least wish I  had the same ability and discipline to beautifully chronicle my life. For Byron Kim this is a life long project and, as it requires that he observes the sky, it combines both observation and introspection. As opposed to On Kawara’s Date Paintings which followed a strict set of rules, with 3,000 made over four decades that only included the date on which they were made, there is a winsomeness to the works by Byron Kim, a willingness to let the viewer into his personal life. You are drawn to read all of the entries and observe the differences in the sky. Yet in common language,  a Sunday painter is an amateur painter who goes out and dabbles at painting  on his day off, not a professional, gallery represented artist.  These works therefore as with much of Byron Kim’s work engage the viewer in an intimate, perhaps  ironic and humorous moment,  one where the artist is painting for the pleasure of painting and making works that may not be as serious as the more weighty topics he takes on when he is pursuing his career as “an important artist”.

Byron Kim is a profound observer of intimate and small wonders that he renders with  poetic and seductive panache. There is often a link to poetry or writing. He has stated:”It’s almost like I don’t know anything except the little things I encounter every day and the relationships I have with people. I can only get at that in art by concentrating on very small things.” 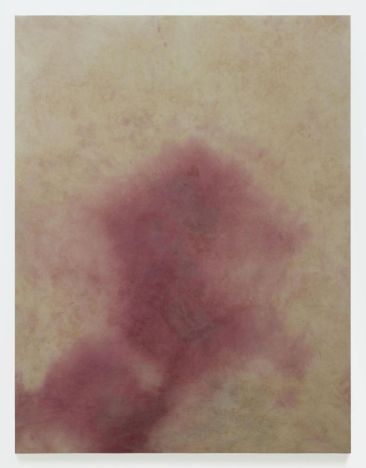 In his Mud Root Ochre Leaf Star Series, Byron Kim painted bruises. These works both attract and repel, seduce and disgust. Without the titles these works could pass as beautiful, abstract,  color field stained canvases. With the titles, they force a questioning of violence versus beauty. They also draw strong parallels to the body as cosmos, to time as they show the evolution of the bruise.

The process used in these works show Byron Kim’s willingness to explore mediums. He boiled and dyed raw canvas and linen with natural dyes before stretching them onto frames, and,  to avoid brushstrokes, painted  with rags soaked in glue or oil.

The idea of painting a bruise came from a poem by Carl Phillips in which the poet observes a bruise on the skin of his sleeping lover. A  bruise is a stain under the skin,  paint is a stain on the canvas.  The titles of this work however comment as much on the event as on the process:  ” Evidence of a Struggle” and  ” Stain, Methylene Blue” for example.

Emphasizing his attention to detail and the way that his monochromatic panels are portraits, Byron Kim has used the format of the grid  to disarmingly document and portray all of the hues on his one year old son’s body. 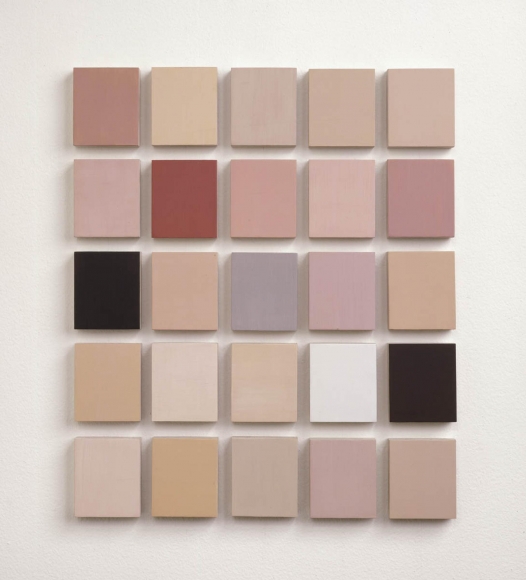 The series “What I see” uses a different aesthetic and medium. Byron Kim begins by  photographing  everything that he can see -360degrees in every direction, including his  feet and legs. As opposed to the photo assemblages by David Hockney,  his intent is to show the  individual within the vastness of the world and to emphasize the important places in his life, once again making the works delightfully personal. 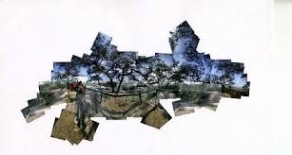 At times the portraiture is simply a focus on a small detail as the two small paintings, seemingly brown and black monochromes that actually depict the hair whorls on the heads of his children Ella and Emmett.

Whether influenced by his wife’s pregnancy or simply derived from his desire to make paintings that just ” have too much paint on them”, the Belly Paintings are bulging sacks of paint.  Often made on-site and installed inside galleries, seeming very precarious, these paintings consist of latex  or encaustic pouches attached to canvases and filled with latex paint and are reminiscent of pregnant bellies, thus hinting at figurative representation.

There is an attempt to use color as a trope or referent to the precariousness of memory in particular in works such as:

46 Halsey Drive Wallingford, a large work, 96″48′ that incorporates  the colors of his childhood home done by memory in house paint on plywood.

Miss Mushinski (First Big Crush) derived from a top he wore  when his grade school teacher told him that she liked it. He claims he then wore it every day for three weeks.

Not all of the series have the same poignancy and in my opinion emotional or social charge but continue his exploration of color as a key to cultural identity.

For example the Grey Green paintings inspired by the glazes of Goryeo Dyansty-period celadon wares important to the Korean community where he muses as to whether beauty is learnt or innate as he paints the various hues of green he sees in the glazes.

or the primarily black paintings inspired by the works of Maria Martinez, a New Mexican ceramicist was featured known for reviving Pueblo style of black-on-black pottery.

As a wonderful observer and interpreter of the intimacies and intricacies of life and society and an artist who forces the viewer to look deeper, care more, think more, Byron Kim is an artist whose future works and shows I look forward to.