Kaari Upson is an extremely intriguing, disturbing and inventive artist whose work was included in the Whitney Biennial of 2017 and who has a solo exhibit at the New Museum through September 10, 2017. Surprisingly, perhaps because the work is based so much on  everyday objects, they are upsetting and comforting at the same time. 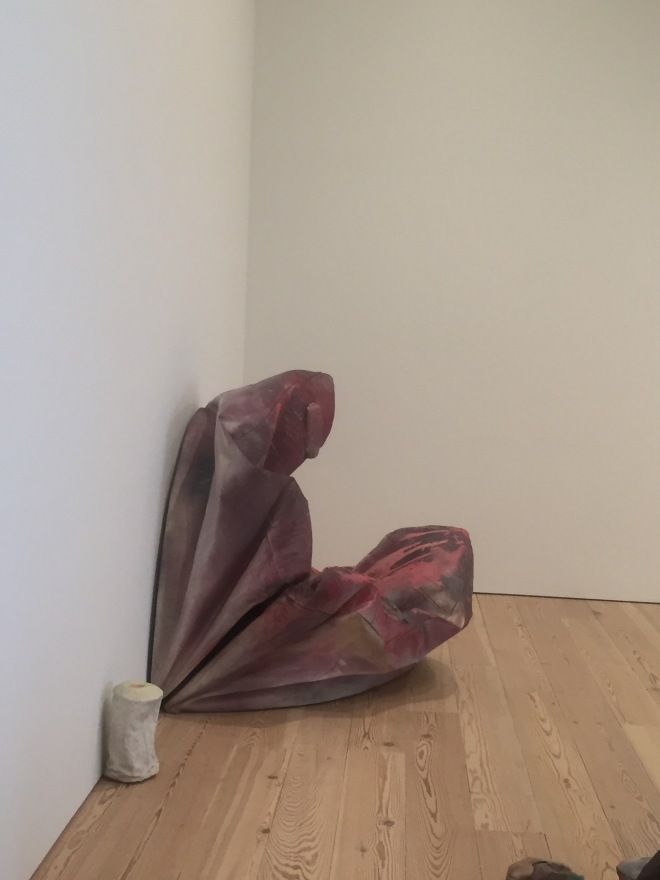 Kaari  Upson was born in 1972 and lives in Los Angeles and New York. Although she works in many mediums- drawing, video, installation and sculpture,  I am mainly fascinated by her sculptures which she describes as the byproduct of the drawings and videos. These objects, made of silicone, hair, fiberglass, urethane, aluminum, latex, aluminum cans, stuffed dolls, her mother’s clothes, have extremely evocative titles such as “My mother Drinks Pepsi”, “Foot on Throat” and “Death Bed”.  She bases her sculptural work on possessions, everyday articles such as mattresses , couches, trashcans or pepsi cans, a track house in Las Vegas.  However this is not pop art. The articles are reproduced, cast, painted on. They are transformed and at times require close examination before the viewer recognizes the original source material.  She is examining them and forcing the viewer to take a fresh look at them, to give them a new life, a new value. She draws on psychoanalysis -mainly Freudian and Laconian that influenced her at CalArts.  Her works are a mix of fantasy, personal issues, pyschoanalytics, capitalistic consumerism and sex. 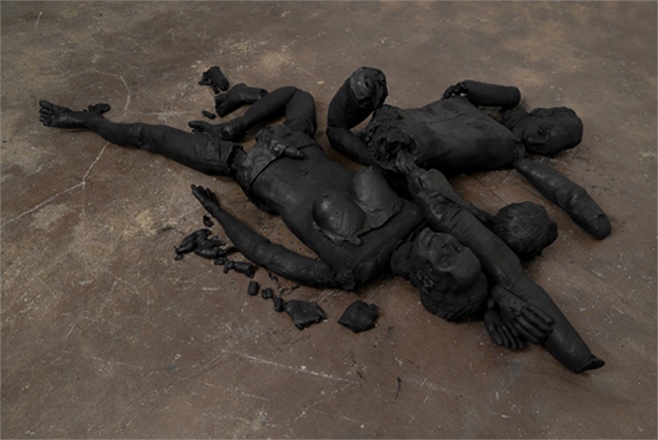 She uses these objects to represent people- or moments of her life or mirrored personas.  Some of the people are real- there is a particular preoccupation with her mother. Some are make believe,  as with the project based on Larry- a fictitious name she assigned to her parents neighbor whose possessions she salvaged after his house burnt down. Cancer influenced the project Sleep with the Key which features silicon replicas of discarded mattresses. A found couch was the impetus for the project at the Whitney, yet it becomes so much more than a couch it takes on a life of its own, evoking in the viewer ghosts from their psyche.  Almost like in Disney’s Fantasia, you expect some of the sculptures to get up and move on their own.

She transforms these objects through groupings or by letting their shapes erode so they are only a ghost of what they once were, she forces the viewer to consider how one so closely associates certain people to certain objects and in parallel, certain objects to certain times of one’s own life. She allows chance into the making of a work. For example,  the pepsi cans are made using an experimental casting process: a Pepsi can is filled with liquid aluminum that melts into the can’s form, merging the stream of metal and the can into one solid object. The colors of the can burn off, but there is a shadow of the label left. (1) the mattresses require takes four or five people at all times. The mold itself weighs 100 pounds or so. It’s made of Aqua-Resin, and it has to be a hard mold, because one has to be able to lay it down, prop it up, turn it. She doesn’t  know what she will get until the end.  This is multiple hands. There’s no one gesture; it’s a multiplicity of gestures. All the painting is done in the mold. The first marks, the airbrushing quality, is silicone sprayed in the mold.  (2)

The drawings are harder to focus on initially. Extremely involved, convoluted, filled with words, almost like streams of consciousness understandable only to the artist. You are drawn to trying to decipher them and wishing for a decoding book.

In Art Newspaper the artist is quoted as saying: “There’s no beginning, middle or end in the work… some of them started five years ago, so they’re drawings I work on. Some people have described them as the unconscious of certain sculptures.When I work on one drawing, and I add the first text, or even an image, it’s recycled back in on itself. Then an accident of two texts that I’m researching might overlap an image that I put on… As these things layer, it generally points to a direction of an answer to how a three-dimensional object might get made. ”