He is not a young, to be discovered, recently discovered or up and coming artist, so a slight digression from my prior posts.  On the contrary, Anselm Kiefer is a world renowned German painter and sculptor, born in 1945.

Recent exhibits have included romantic watercolors and a number of artist books and these pieces were a discovery for me. I am writing about him today as he is an artist I absolutely adore and I want to share with you my passion for him.

I think some viewers are distressed by the content of his works, in particular how much of the imagery he is looking at was part of the fascist and nationalistic propaganda of Nazi Germany. He also incorporates many of the elements or weapons of war, battle ships and airplanes. His palate is largely gray. The scale is massive. He is not using art to redeem or hide the past.

He is identified as a German artist and he originally focused on German identity and its dealing with its Nazi past. This was an important aspect of his earliest works, in particular those displayed at the Venice Biennale in 1980, two of which from the Tate is shown below where he is paints or photographs himself doing the Nazi salute. Anselm Kiefer was born in the last year of the Second World War and grew up in a destroyed, bombed out Germany that wanted to forget what had just occurred.

I would describe him rather as a historical, and philosophical painter. In Anselm Kiefer’s work he deals with time,  human existence, continuity,  hope and despair, memory and heritage.

He not only deals with historical memory and the need to take responsibilities for past action, he also forces the viewer to face  the universal theme of the enticement and possible inevitability of evil, of who they might have been in different circumstances, the deeper meaning, the need to make sense of the world, why one is here and how one got here.

Kiefer has said, ” creation and destruction are one and the same”. But these are not dark visions, there is an energy and upwelling of hope also.  The paintings of flowers, part of the Morgenthau series are beautiful and color filled, the title however provides the negative, bleak connotation since knowledge of the Morgenthau plan, to turn Germany into an agricultural society, provided the Nazis with the impetus for continued fighting.  There is always this push and pull evident in the works.

Anselm Kiefer is an intellectual, poetic and historical painter. His works incorporate elements of Wagner’s Ring Circle, the poetry of Paul Celan and Rilke, the Old and New Testaments, Norse mythology, the Kabbalah, the occult, ancient civilizations. Image Valhalla from White Cube.

Words appear throughout, difficult to decipher but clearly present to draw you into further study. Kiefer has said that he had to choose between being a writer and a painter. When you listen to him speak he is constantly quoting poetry, stating that at one time he knew more than 200 poems.

Several of his works, in particular the larger ones incorporate lead, ” I feel closest to lead because it is like us,” Kiefer has said. “It’s changeable and has potential to achieve a higher state of gold.” It also is a poisonous material and when used as he does in the form of books, may reference the weight and contamination of history. Kiefer has stated that history is like clay, it can be abused and molded. He acquired an obsolete lead roof of the Cologne Cathedral and has used it in his works.

The works often also incorporate sunflower. As a young man he was fascinated by Van Gogh. But Anselm’s sunflowers are dead, dried up, full of seeds. They represent death and rebirth.

His pictures are thick with paint- impasto- and embedded with objects.  Layers are added one atop the other to create a thick layer of paint that he then hacks out. The process of making the paintings itself integrate the concept of composition and destruction. He at times uses electrolyses or a flame thrower to alter the works. He likes how the works change with time and the effect of nature, gravity.

His oeuvre also includes sculptures and vitrines. They too are fascinating and deserve their own blog post.  Interestingly, his first collectors were American, better able to deal with the narrative. He has created immersive, massive studio spaces that are worlds of their own at  Barjac France and  Croissy Beaubourg.  I am ending this with images of those two studios from a wonderful documentary ” Remembering the Future” , a book Anselm Kiefer Ateliers by Daniele Cohn and another by Phaidon. 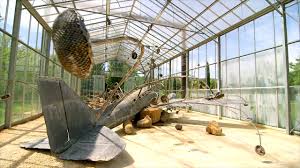 One thought on “Artistfacts: Anselm Kiefer”